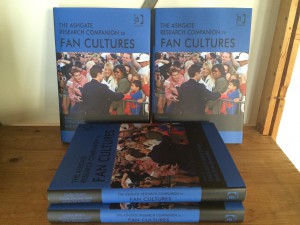 Fans are special. Nowadays they appear to be the holy grail of media culture, which makes it hard to believe that they were once its outcasts. From the 1990s onwards, fans became the objects of serious academic inquiry. Concepts derived from this new field of fan studies – like the active audience, transmedial storytelling and co-creation – are now the standard fare of journalism and marketing text books alike. Likewise, ‘participation culture’ is no longer a niche phenomenon, but has become the new normative standard. Usage of the word fan has become ubiquitous and it is now applied to a range of audience positions, from frequent watchers (due to television broadcasters’ promotional strategies) to returning customers (due to Facebook terminology).

These developments call for a critical rethinking of the function and significance of fandom, fan practices and fan studies. Together with Koos Zwaan and Stijn Reijnders I edited the Ashgate Research Companion to Fan Cultures. In this volume we show that the current exaltation of audiences and fans is problematic. It consists of three parts, each addressing a guiding question: (1) What is a fan?; (2) What is the current relationship between fans and producers?; (3) Where does contemporary fandom manifest itself? As a whole, the 22 peer-reviewed chapters written by experts in the field elucidate the key themes that are part of the fan studies vernacular.

The book is published by Ashgate. The introductory chapter, authored by Zwaan, Duits and Reijnders is freely available here.