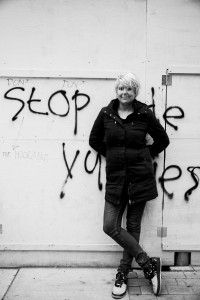 In 2010, she decided to focus on disseminating academic knowledge and founded her company Diep Onderzoek. This agency investigates the meaning of media in everyday life and shares insights through publications and lectures. Linda regularly appears in the media as an expert to comment on developments in media culture. Through Diep, she can be booked to speak on a variety of topics, or to act as a moderator for your debate or symposium. Diep also offers specialized workshops on popular writing, science communication and social media for academics.

Ever since, Linda has been an active producer of media. In 2012 she initiated the podcast Onder Mediadoctoren, now of the longest running Dutch language podcasts. Geeky Dingen followed in 2018, a podcast on popculture and geekdom.

She writes extensively: about popular culture on Diep’s blog, and about sex and gender for different outlets. She has been a columnist for Folia, the University of Amsterdam’s independent magazine, since September 2015, and for Brainwash, a platform for new ideas, since August 2017. Infrequently, she publishes op-ed pieces in print titles such as Het Parool, de Volkskrant and NRC Handelsblad.

In addition to her commercial activities, Linda conducts academic research. She is an affiliated researcher with the Institute for Cultural Inquiry (ICON) of Utrecht University and part of the Amsterdam Research Center for Gender and Sexuality (ARC-GS). Her work has been published in, amongst others, the European Journal of Women’s Studies and the European Journal of Communication. She co-edited the Ashgate Research Companion to Fan Cultures (2014).