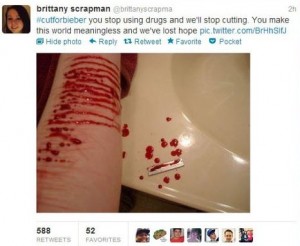 Justin Bieber fans are often the target of hate and abuse online. Internet trolls originating on 4chan wanted to mess around with Bieber and his fans and started #cutforbieber on Twitter, a call to fans to cut themselves to protest Bieber’s use of marihuana. Trolls posing as girls sent round fake pictures of bleeding arms. This hashtag quickly became trending worldwide, although it is unclear if there were any girls actually cutting themselves. The tweets and pictures caused major parental concern. I spoke to daily newspaper Trouw about it. I explained the notion of trolling and tried to reassure parents that normally functioning girls do not start to automutilate themselves based on some tweets. Read article [PDF].