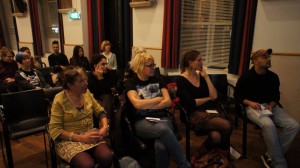 Amsterdam United is “the super diverse platform” of the University of Amsterdam. Founded by students, the platform organizes events and debates for students and staff. I was invited to give a lecture on gender diversity in academia. The other speakers were Saskia Bonjour and Angela Grooten (see picture).

In my talk, I focused on role models, which I find a highly problematic term. I suggested navigation points instead, following David Gauntlett. The concept of navigation points proves particularly useful in the absence of positive identifications in terms of gender, ethnicity, ability, sexuality, race, ability, class and other intersectional identities. Positive navigation points might become mentors. In the second part of my lecture, I discussed mentor guiding principles and my relationship with a mentor of my own, Liesbet van Zoonen, who was my PhD supervisor.